Kanab is in the center of Utah's scenic Southwest and is located just north of the Arizona border, 80 miles east of St. George. When traveling along Scenic Byway U.S. 89 while in Kanab you will be less than 90 minutes from Bryce, Zion, and Grand Canyon National parks. Pipe Springs, Cedar Breaks National Monument, Coral Pink Sand Dunes and Kodachrome Basin State Park are also just minutes away. Glen Canyon National Recreation Area better know as Lake Powell is just a short 60 miles east of Kanab Utah.

Along the beautiful streets of Kanab is a large array of restaurants, art galleries, gift shops, and other locally owned businesses.

Walk in the sunshine, take a breath of fresh air, and enjoy the shopping possibilities offered by our unique gift shops. Sit down, relax, and have a bite to eat at one of Kanab's fine restaurants or just sit back and enjoy the incredible scenery surrounding this quaint little town.

Our lodging staff, including some Kanab natives, will be happy to give you information on Kanab’s restaurants, shopping, history, events and directions.

Kanab, Utah, is a city celebrated for its breathtaking scenery, temperate climate, and laid back attitude. Think of it as a sort of oasis in the surrounding desert environment. The word "Kanab" comes from a Native American word for a willow basket used to carry an infant on its mother's back. The first attempt by Anglo-Americans to establish a permanent settlement was made on June 7, 1858. The story of Kanab's first two decades is one of a series of unsuccessful efforts at colonization, each one discouraged by attacks from hostile Native American tribes who were clearly opposed to white settlement of the area.

Jacob Hamblin played a key role in negotiations with the Native Americans that eventually opened up the area to white occupation. LDS Church President Brigham Young appointed Hamblin president of the Santa Clara Indian Mission on August 4, 1857. Hamblin organized a series of expeditions to the Paiute, the Moquis, and the Navajo to negotiate terms of peacefully sharing the land. Nevertheless, through the 1860s raids and confrontations occurred regularly between the two groups and initial attempts at settlement of Kanab included a fort built in 1864-65 (soon vacated), another in 1868, and a third attempt in 1870 by a colony of seventeen settlers who came to the area from Salt Lake City. 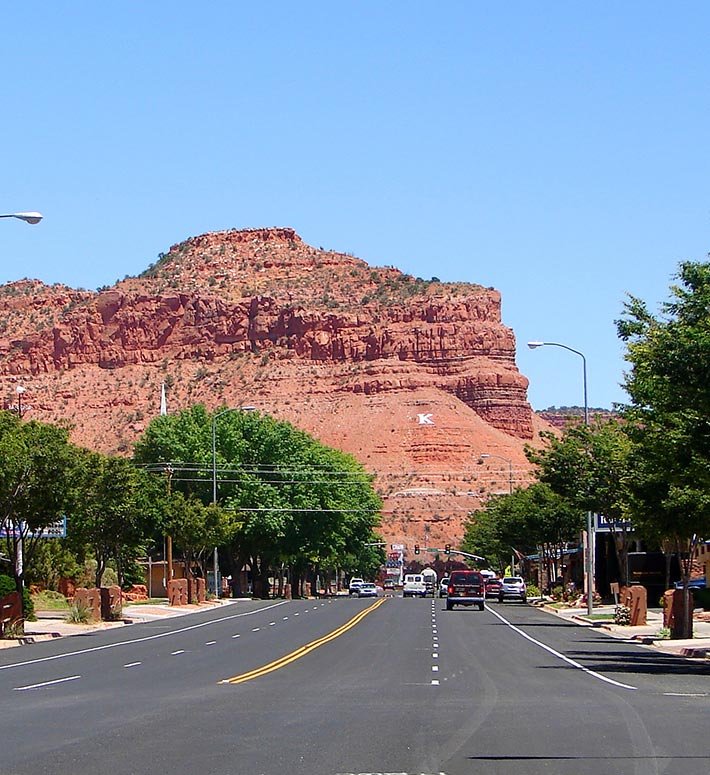 During the summer of 1870, the fort at Kanab was described as a bustling center of activity. It became the focal point for local pioneering, missionary work, and exploration, and was also a relief point, trading-post, and base of operations for the Geological Survey. President Young visited the fort in April 1870 to bless the land and set it apart for the gathering of the Saints. He made the decision to stock the country with cattle, sheep, and horses. Within months, the townsite was surveyed and town lots were distributed among the local families. The next day the Mormons organized a ward; in September the group built a schoolhouse.

A visitor to Kanab one year later described the struggles of the desert town: "The grasshoppers had taken part of the wheat that was growing. The crop was light at the best, having been planted with a lick and a promise and not watered until too late to have a satisfactory stand. Because of the difficulty in working the land, the locals decided to organize cooperatively for farming. The group farm was located south of the town and included 120 acres of corn, cane, and other food products. In 1881 President John Taylor of the LDS Church called James Guthiar and Ruben Broadbent to move to Kanab to build a grist mill in Kanab Canyon, three miles north of town. During the 1890s, Zadok K. Judd built a small grist mill on his own property to the east of town. In 1915 a group of investors built a third major grist mill.

Although the railroad never came as far south and east as Kanab, the Deseret Telegraph line came to town in 1871 and connected the area to the rest of the world. Frederick Dellanbaugh, a member of the John Wesley Powell expedition through southern Utah, described Kanab in his book Canyon Voyage: "The village which had been started only a year or two was laid out in the characteristic Mormon style, with wide streets and regular lots, fenced by wattling willows between stakes. Irrigation ditches ran down each side of every street. The entire settlement had a thrifty air as is the case with the Mormons. Not a grog-shop or gambling saloon, or dance hall was to be seen; ordinarily the usual disgraceful accompaniments of the frontier town."

As early as 1922 Kane County's scenery and climate attracted movie producers and actors when Tom Mix filmed "Deadwood Coach," with the Vermillion Cliffs as a backdrop. The motion picture industry provided a needed economic boost for Kanab during of the twentieth century and changed what Kanab had originally been known as, a cattle town, into a favorite locale for many cowboy movies. Since the 1920's hundreds of movies have been filmed in the area and provided an positive impact on the economy of Kanab. Another significant development of Kanab was the construction of Glen Canyon Dam which began 1956 and the population of Kanab grew because of the boost to the economy.

Tourists also frequently come to Kanab to enjoy the splendors of the nearby landscape. The town is only minutes away by automobile from Kaibab National Forest, and Grand Canyon, Bryce, and Zion national parks. The nearby Coral Pink Sand Dunes and other scenic attractions also attract tourists, nature lovers, and other outdoor enthusiasts. In 1990 the city had a population of 3,289 people. It is the county seat of Kane County and features many businesses, particularly in the tourist service sector.

We are committed to making our website ADA compliant. Read our accessibility statement